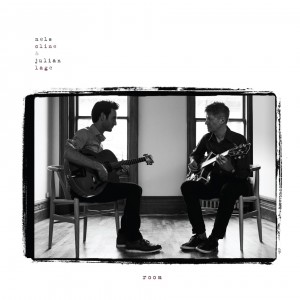 On November 25, 2014, Nels Cline and Julian Lage released their debut duo album, “room”.  The entire album was recorded live to tape at the world-famous Sear Sound in New York City this past spring by Chris Allen.  Mack Avenue has put the album out on CD, Vinyl, Mastered for iTunes, and Hi-res 88.2kHz 24-bit format via HDTracks.com.  Nels contacted me back in June about mastering the album, and naturally I was thrilled.  Nels and Julian attended the mastering session with me at Engine Room Audio.  It was a memorable experience for me, getting to sit in the studio with Nels Cline and Julian Lage, and having the opportunity to master their album.  I’m proud to have been a part of this release.

Recorded and mixed by Christopher Allen at Sear Sound, NYC

Layout by Matt Pfahlert with Nels and Julian